Hola Mohalla or simply Hola is a Sikh festival that takes place on the first of the lunar month of Chet which usually falls in March. From the time of the Tenth Guru of Sikhs, Sri Guru Gobind Singh Ji, the community gets together for three consecutive days to display their martial spirit & legacy of the Sikh warriors. 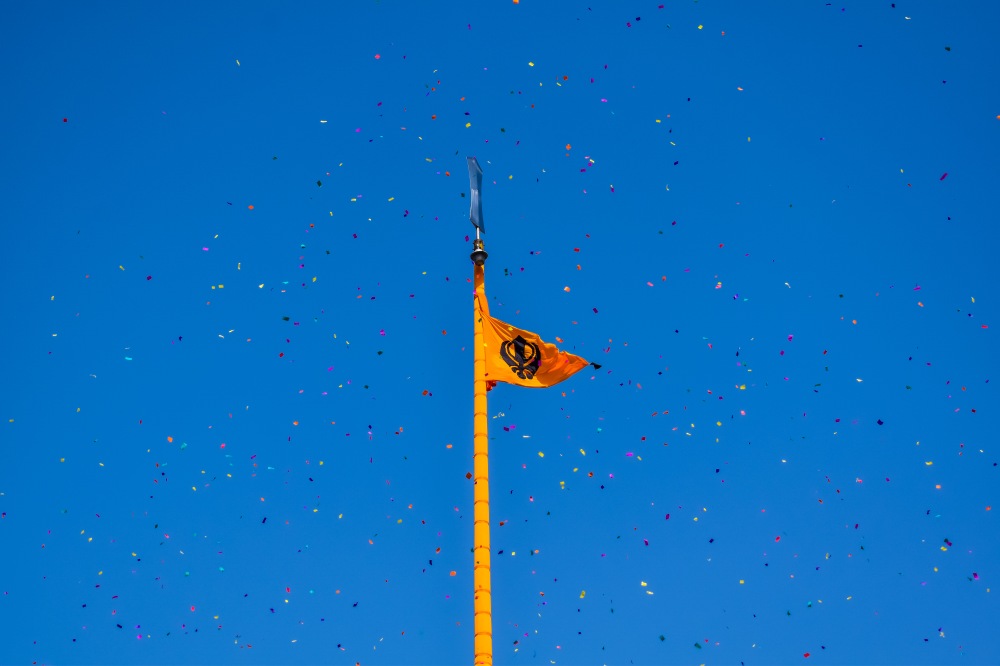 The word “Mohalla” is derived from the Arabic root hal (alighting, descending) and is a Punjabi word that implies an organized procession in the form of an army column. But unlike Holi, when people playfully sprinkle coloured powder, dry or mixed in water, on each other, the Guru Sahib made Hola Mohalla an occasion for the Sikhs to demonstrate their martial skills in simulated battles. 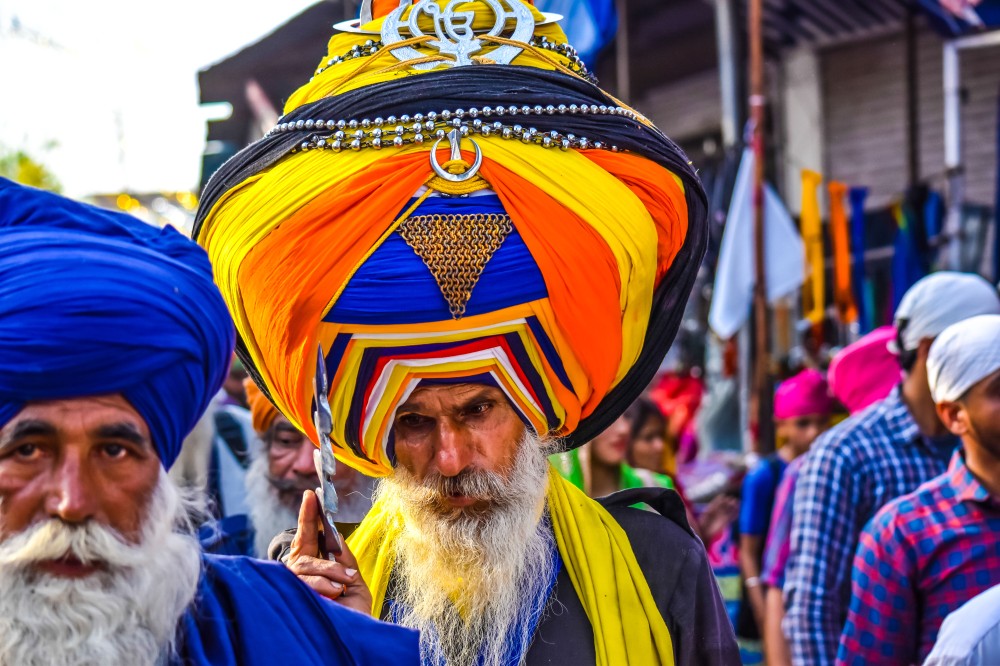 Together the phrase “Hola Mohalla” stands for “mock fight”. During this festival, processions are organised in the form of army type columns accompanied by war-drums, standard-bearers, who proceed to a given spot or move in a state from one Gurdwara to another. The custom originated in the time of Sri Guru Gobind Singh Ji who held the first such mock fight event at  Sri Anandpur Sahib in February 1701. The military exercise, which was personally supervised by the Guru Sahib, was carried out on the bed of the River Charan Ganga with the famous Hindu temple of Mata Naina Devi in the Shivaliks as the backdrop. 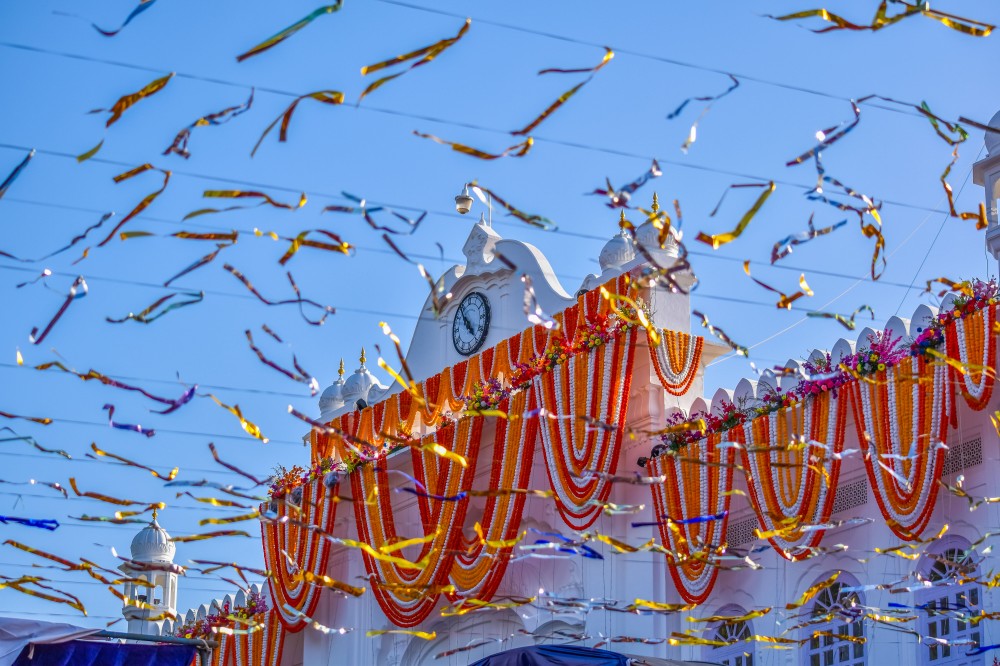 All believers spend time in various sewa activities. A special sewa of sprinkling perfume on Sangat is also carried out during Holla Mohalla celebrations. 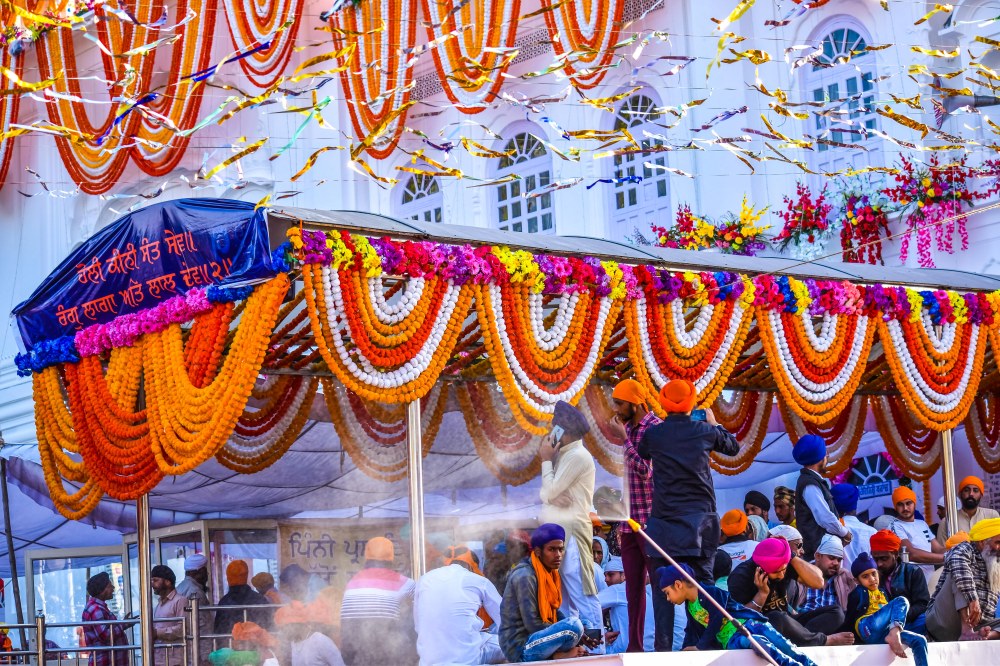 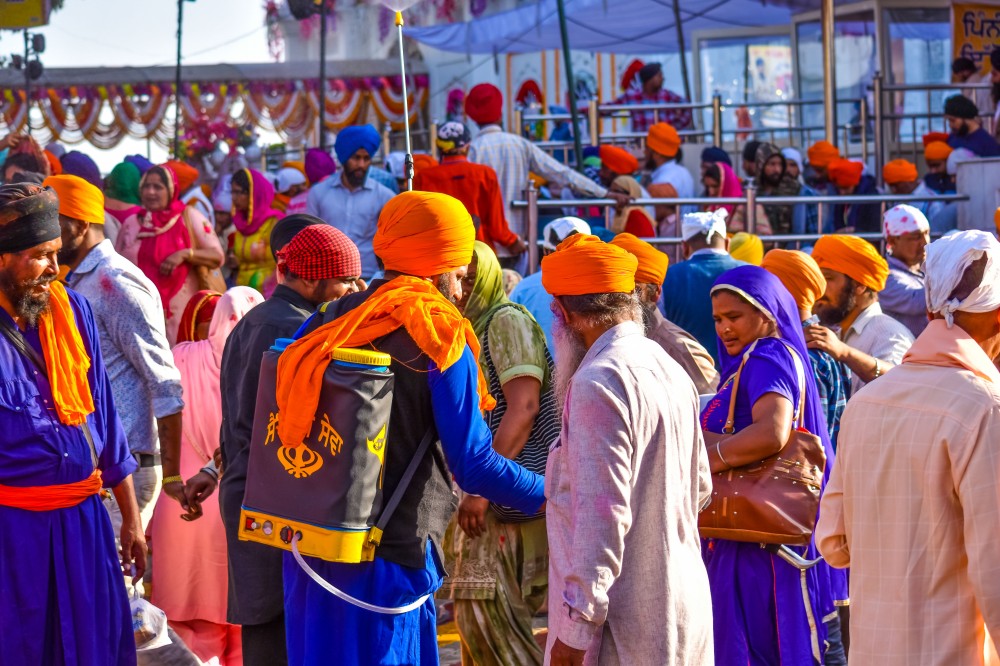 This annual festival held at Sri Anandpur Sahib in Punjab and now replicated at other Gurdwaras worldwide was started by the tenth Sikh Guru, as a gathering of Sikhs for military exercises and mock battles with an impressive and colourful procession on the day following the festival of Holi at Sri Anandpur Sahib. It reminds the people of valour and defence preparedness, concepts dear to the Tenth Guru who was at that time defending the Sikhs from the attacks of the Mughal empire and the hill kings. 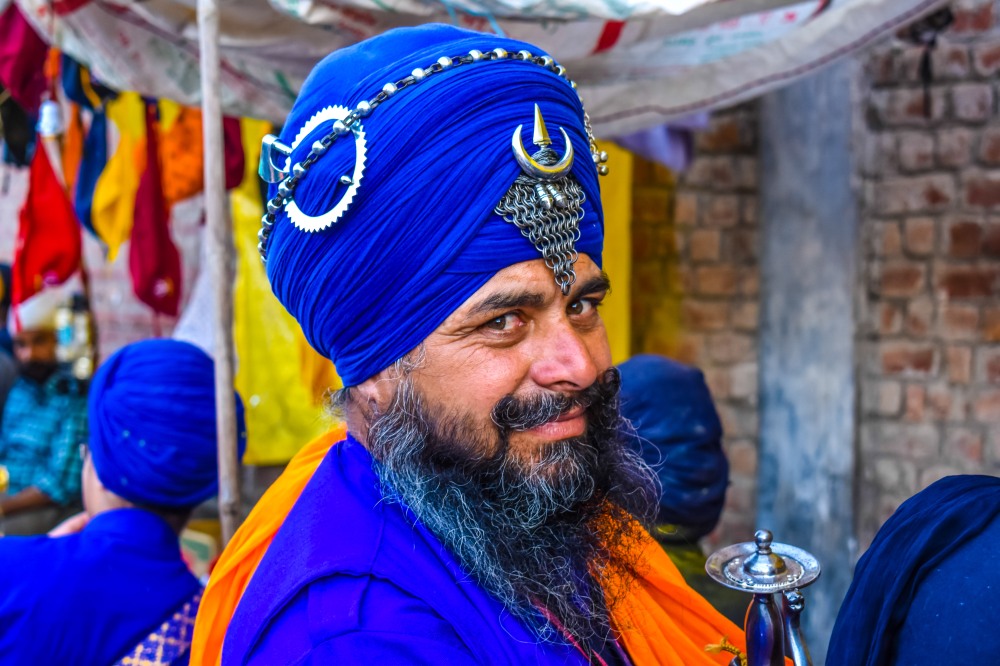 For three days during the festival every year, Anandpur Sahib transforms into a rambunctious carnival ground. People pour in from across the country for Hola Mohalla. The town wakes up to the noisy arrivals of tourists and devotees, and the lingering smells of community kitchens (hundreds of them). Tractor-trailers, complete with three-tier beds of straw and mattresses, can give gypsy caravans a run for their money. Truckloads of families follow enthusiastic bikers into town, their huge saffron flags billowing from the vehicles. The highway is peppered with trucks, tractors, bikes, jeeps, bicycles and buses. Portly men from Punjab Police try in vain to regulate the annual traffic jam. On the weather-beaten faces of the farmers in the neighbouring fields, there are big smiles while songs and cheers constantly escape their lips. 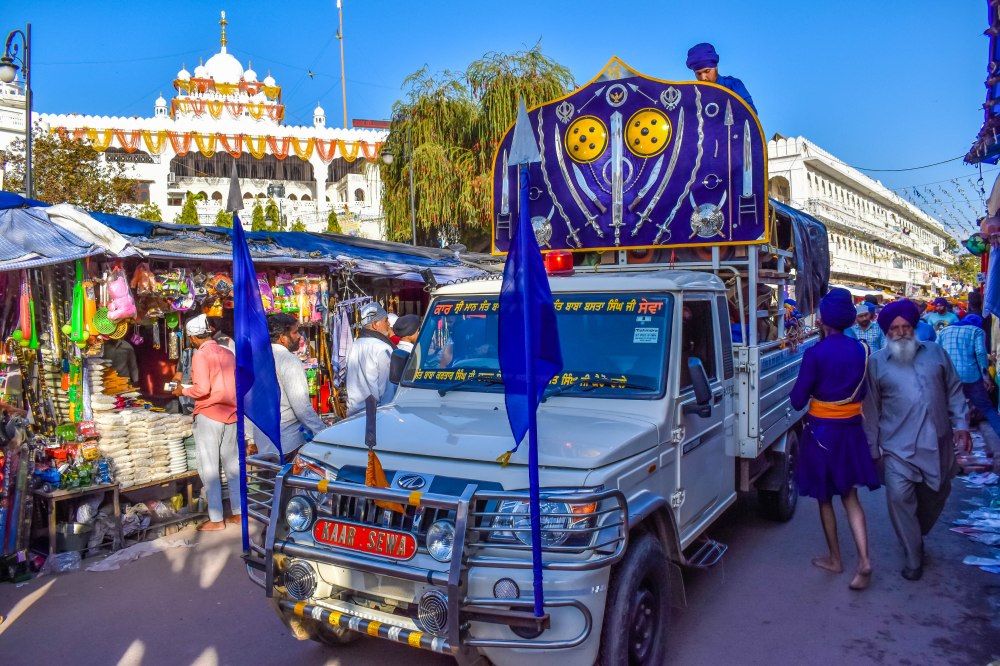 There are also a number of Darbars where Sri Guru Granth Sahib Ji is present and kirtan and religious lectures take place. On the last day a long procession, led by Panj Pyaras starts from Takht Sri Kesgarh Sahib one of the five Sikh religious seats, and passes through various important Gurdwaras like Qila Anandgarh, Lohgarh Sahib, Mata Jitoji and terminates at the Takhat (Sri Kesg Sahib). 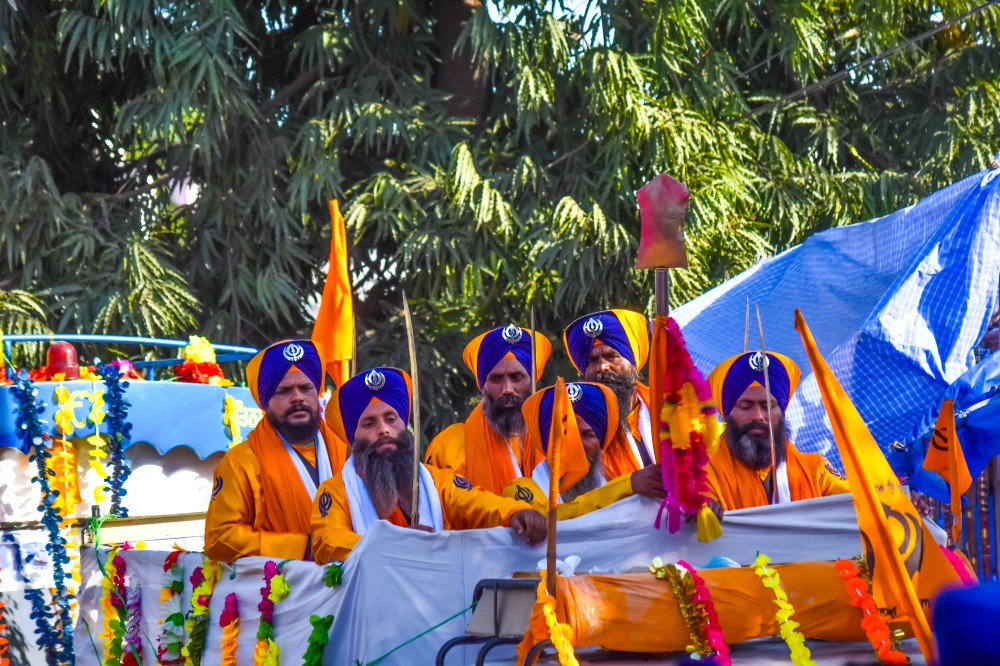 At the langars, volunteers work round-the-clock in shifts to feed visitors seated cross-legged on the floor, in symbolic equality. The love and devotion in serving people through the langar, or community kitchen, is as old as Sikhism, and all believers spend time in sewa, helping out at the langars. Young and old sit together as they peel vegetables and knead the dough; a few others are busy scrubbing dirty utensils while the rest serve the food with smiling faces. The people receive the food with both hands, in a display of their faith and gratitude.

Outside, the crammed streets are dotted with stalls selling everything from utensils to toy tractors, sweets, tattoos and little dolls with turbans. People make the rounds, their wallets getting lighter but their stomachs always full, constantly fending off invites to try goodies from the various makeshift kitchens.

On the roadside are parked numerous tractor-trailers, open jeeps some equipped with huge speakers, televisions, LCD screens and telephones. People can be seen resting inside them even as others celebrate around them. One tractor proudly displayed the American flag, and its four-foot tall speakers pump out high decibels from behind the driver’s seat. 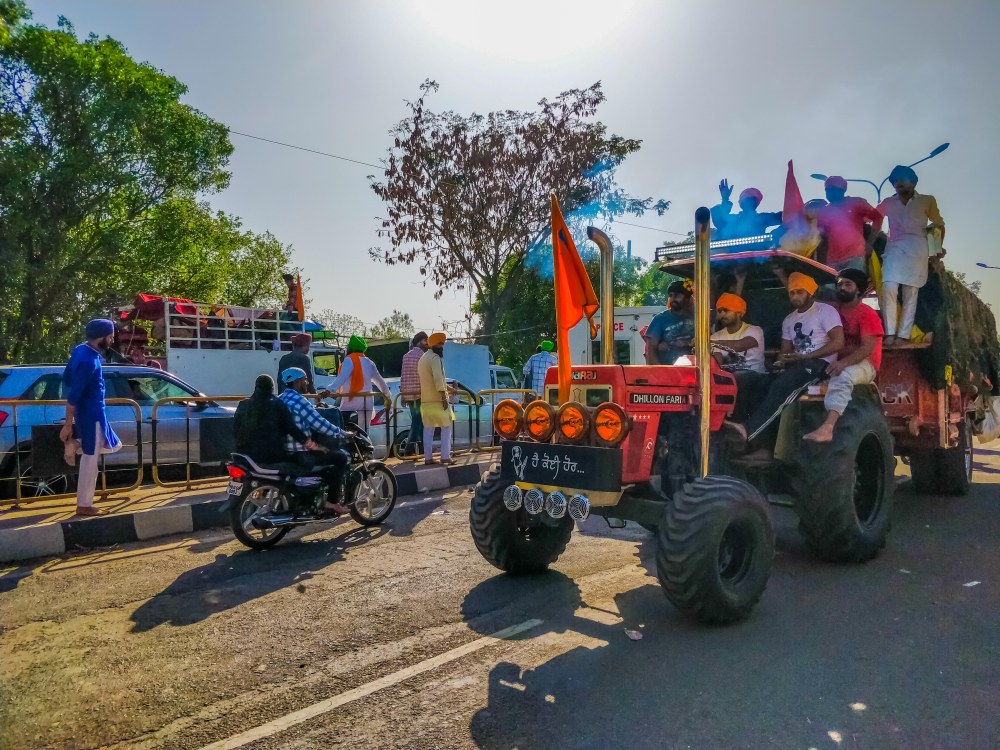 In the night, songs of balladeers ring through the narrow, white-painted streets of Anandpur Sahib. The ‘ dhaahdi jatha’, soulful folk songs and tales of bravery from the times of the Sikh gurus, are set to the beats of the dhadd, the hourglass-shaped drum which is as Punjabi as the bhangra.

Sri Kesgarh Sahib, the Gurdwara at the centre of the town, is one of the five takhts (seats of authority) of the Sikhs and an important pilgrimage site. On April 13 (Baisakhi), 1699, Sri Guru Gobind Singh created the Khalsa (the pure) here. The Sutlej river flows south of the town and the Naini Devi temple looks down from atop the steep Shivalik range in the northeast. The reservoir for the Bhakra Nangal Dam, the Gobind Sagar, lies behind the imposing mountain range. 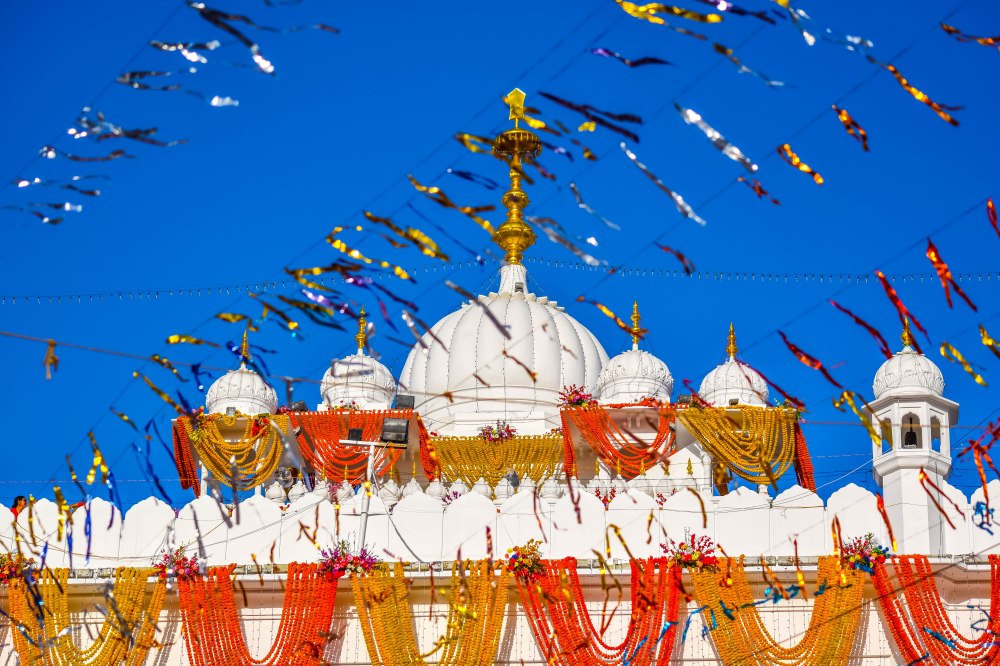 It was a turbulent time for the region; the Sikhs had fought long battles with the Mughals over religious persecution and Guru Gobind Singh wanted an army of battle-ready soldiers. He started a keenly followed tradition of battle games and sportsmanship, which survives to this day. 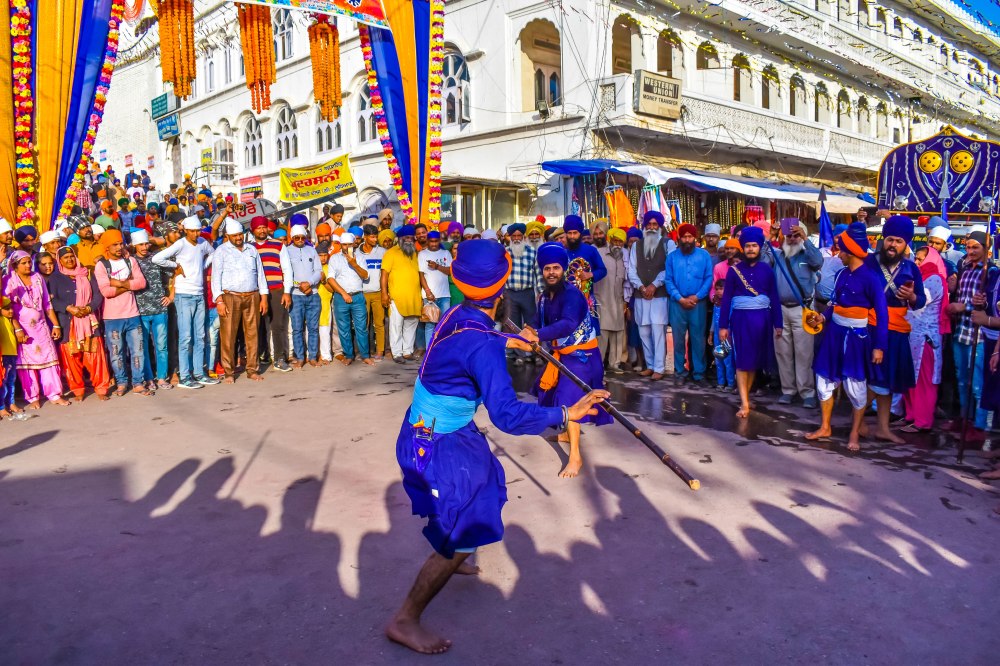 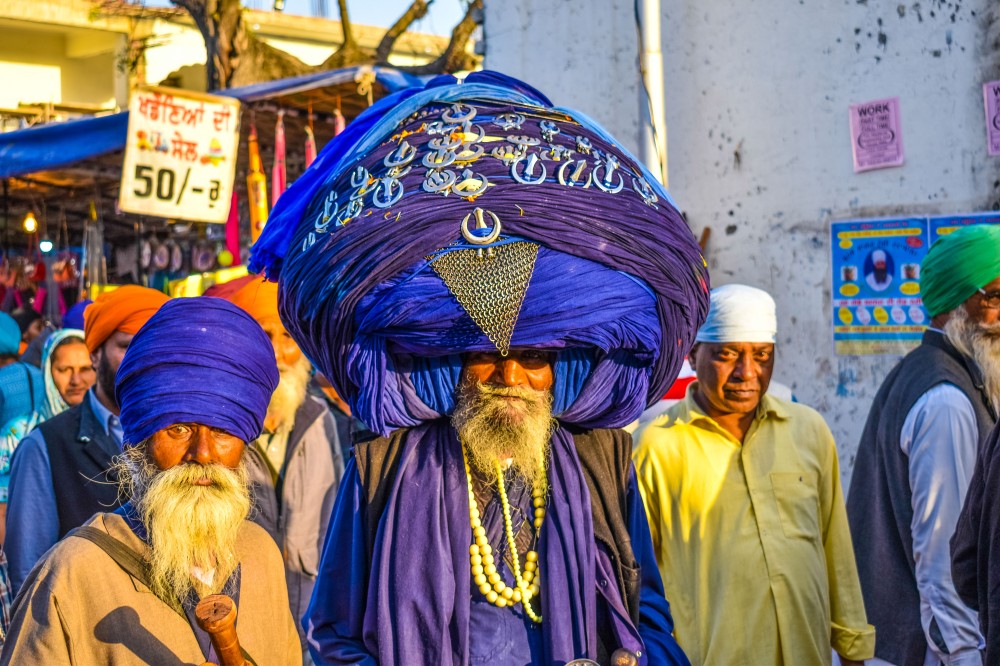 Originally known as Akalis, the  Nihangs or Nihang Singhs are endearingly designated as Guru’s Knights or the Guru’s beloved. They still carry the military ambience and heroic style that was cultivated during the lifetime of Sri Guru Gobind Singh Ji. Nihangs constitute a distinctive order among the Sikhs and are readily recognized by their dark blue loose apparel and their ample, peaked turbans festooned with quoits, insignia of the Khalsa and rosaries, all made of steel. They are always armed and are usually seen mounted heavily laden with weapons such as swords, daggers, spears, rifles, shotguns, and pistols. 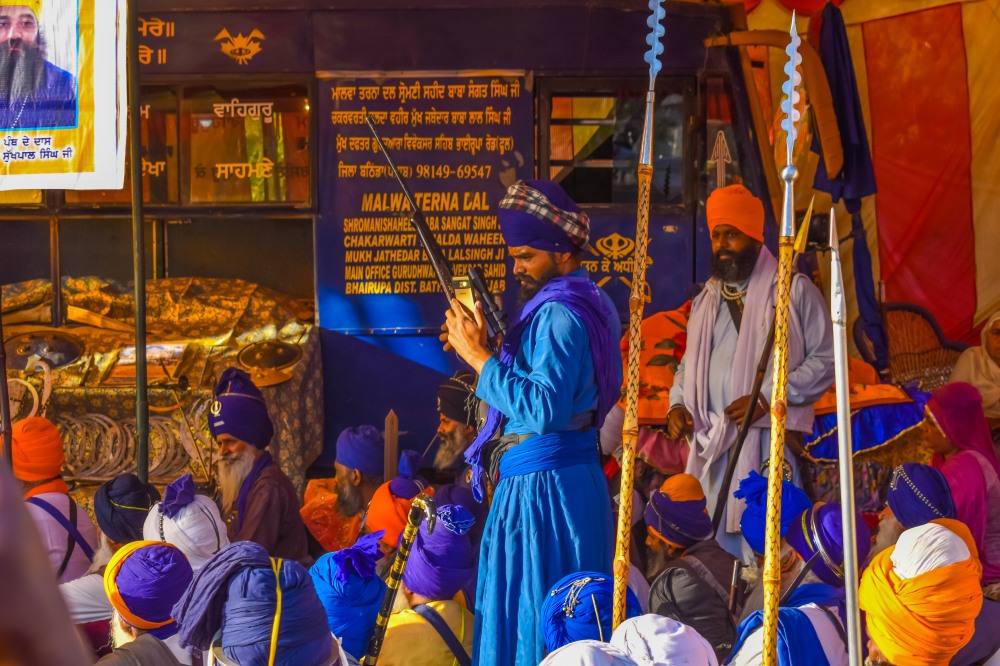 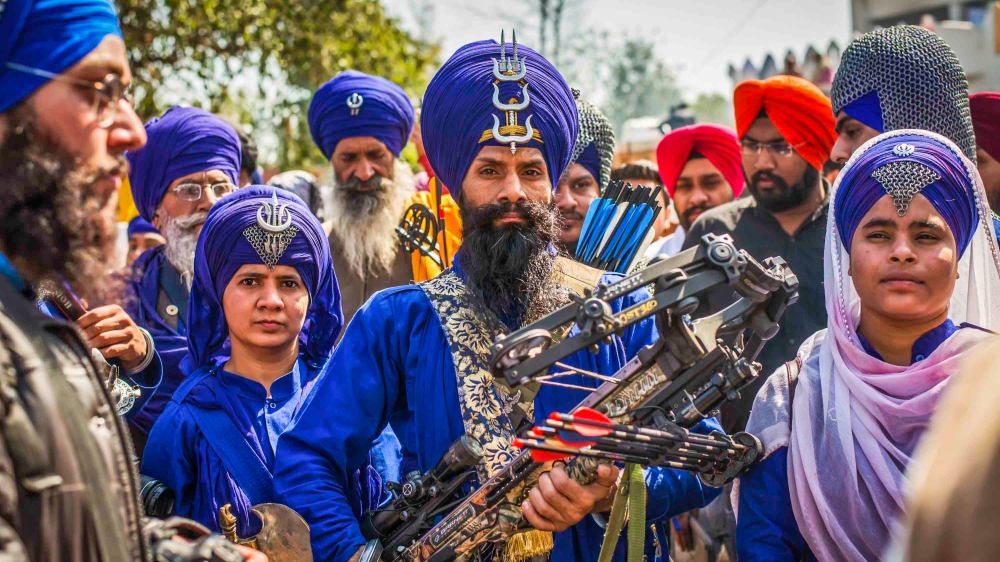 “A Nihang is one without ahankar (pride). With chainmail woven into his double-layered dumala turban and a curved sword on his side, Nihangs strikes a formidable figure. The Nihangs, who live by a strict code of honour, are forbidden from attacking the unarmed. Along with martial skills, optimism and fortitude in the face of adversities are the other Nihang teachings. They find a dry chapati ‘meethi’, and a shabby tent is as lavish as a ‘sheesh mahal’. 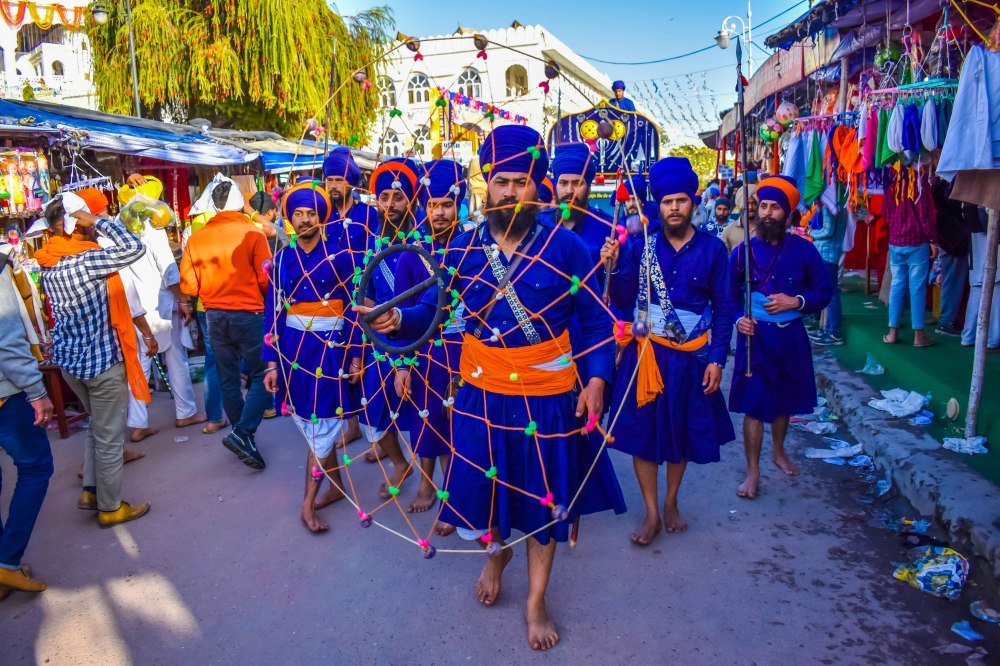 The camps of the Nihangs are spread across the fields around town. Horses are tied between the tents, with young men feeding and preparing the beasts for the final event. The programme begins with a procession of elders carrying the Sri Guru Granth Sahib Ji, passing through the Gurdwaras in the city and ending at the Takht Sri Kesgarh Sahib. 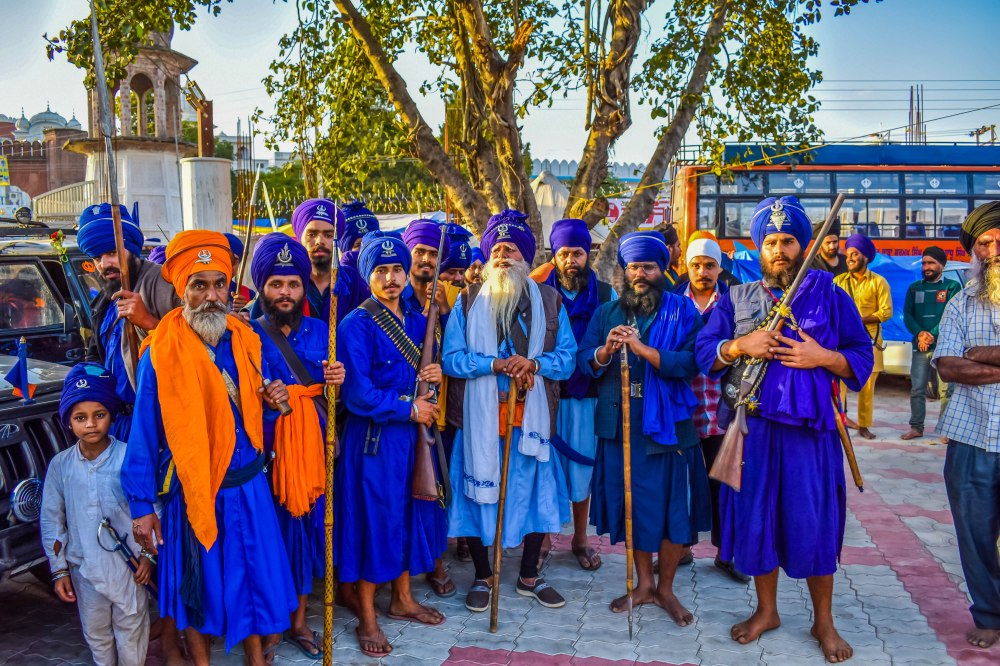 Later in the day, the festivities move to the Charan Ganga Stadium, an open space at one end of the town, where more than a lakh spectators cram in to enjoy the displays of skilled horsemanship, swordplay and weapons training. From noon, the crowds stream into the stadium and swirl around the teams armed with guns, swords, maces and crossbows.

The festival of Hola Mohalla concludes at Gurdwara Holgarh Sahib (which stands on the site of Holgarh Fort), one and a half kilometre northwest of town across the Charan Ganga rivulet. It was here that Sri Guru Gobind Singh Ji introduced in the spring of 1701 the celebration of Holla on the day following the Hindu festival of Holi.

There is a glittering Virasat-e-Khalsa museum, sanctioned in 1999 to commemorate 300 years of Sikhism. The massive and beautiful stone structure stands in harmony with the space around it. Designed by Israeli architect Moshe Safdie, creator of the Holocaust Memorial Museum in Israel and the Marina Bay Sands hotel in Singapore among others, the museum on Sikh history & rich cultural heritage leaves you awestruck. 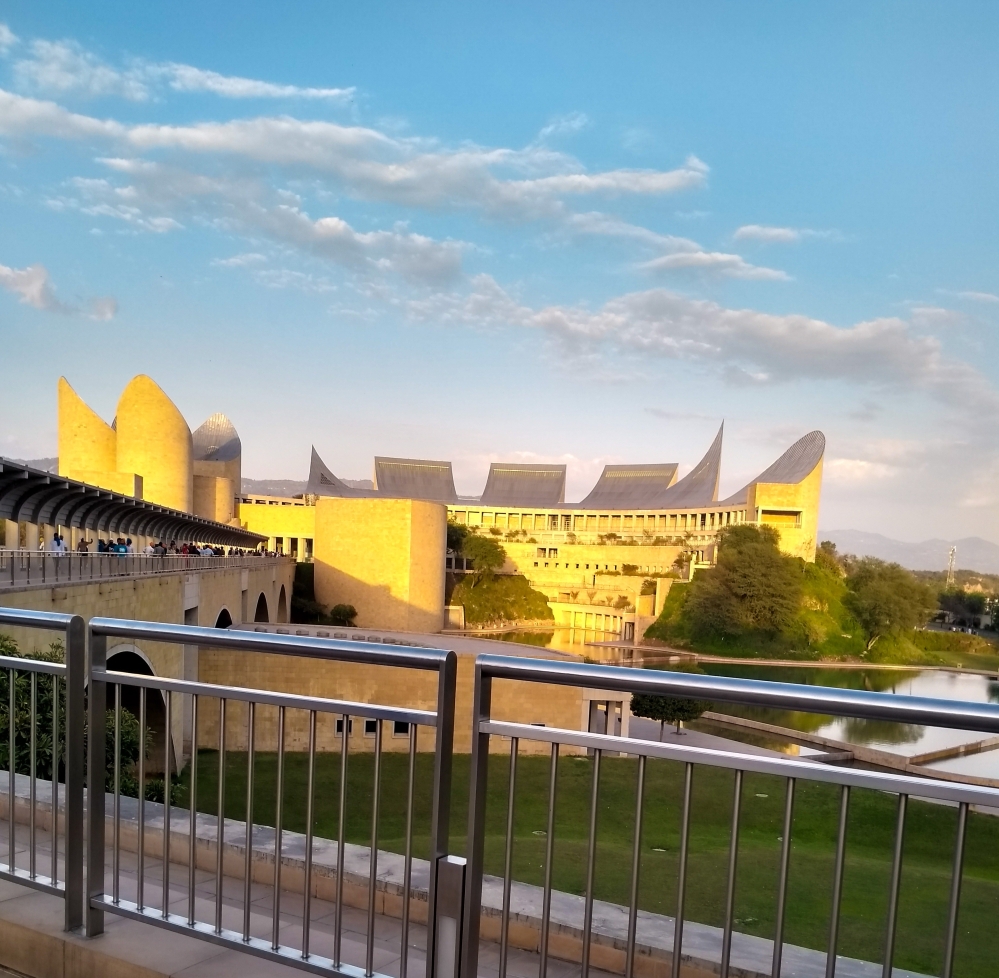 The Hola Mohalla festival is unique and distinguishable from other festivals in that the Nihangs have tried to preserve the traditional form and content as established during its inception, and strictly observed by the Akalis for more than three centuries. The martial arts exhibited by the Nihangs provide a picture of their skills and traditions to the visitors as well as the tourist. Because of its great historical, socio-religious and military significance, the Hola Mahalla festival can impressively contribute to a greater awareness of Sikh heritage as well as foster sustainable development of community tourism. 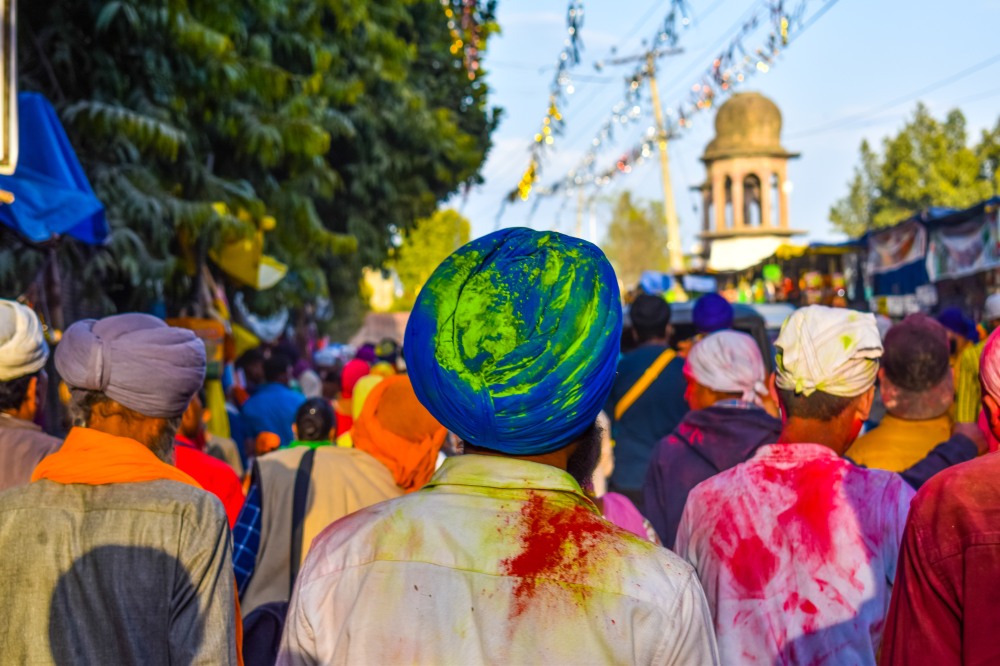