You simply can’t miss visiting the Golden Temple if you are visiting Amritsar. The Golden Temple is the most important Gurudwara and the holiest place for Sikhs that draws millions of pilgrims and tourists every year. Fortunately, I happened to be in Amritsar for some work and I decided to pay my obeisance to Guru Sahib. I have been to Sri Harmandir Sahib a number of times however the night view of the place which is considered as the epitome of spirituality is unique in itself. This article is mostly dedicated to History & Construction of Golden temple and other structures in the complex area. I recommend visiting the Golden Temple complex preferably at night time so as to witness its magnificent architecture illuminated by beautiful lighting all around.

Sri Harmandir Sahib, also known as Sri Darbar Sahib or Golden Temple is named after Hari (God) the temple of God. The Sikhs all over the world, daily wish to pay a visit to Sri Amritsar and to pay obeisance at Sri Harmandir Sahib.

Sri Guru Arjan Dev Ji conceived the idea of creating a central place of worship for the Sikhs and he himself designed the architecture of Sri Harmandir Sahib. Earlier the planning to excavate the holy tank (Amritsar or Amrit Sarovar) was chalked out by Sri Guru Amardas Ji, but it was executed by Sri Guru Ramdas Ji under the supervision of Baba Budha Ji. The land for the site was acquired by the earlier Guru Sahibs on payment or free of cost from the Zamindars (landlords) of native villages. The plan to establish a town settlement was also made. Therefore, the construction work on the Sarovar (the tank) and the town started simultaneously in 1570. The work on both projects completed in 1577 A.D.

Who donated land for Golden Temple?

The land for the site was bought by the Sri Guru Ram Das Ji on payment from the Zamindars (landlords) of native villages. Some people say that the land for Golden Temple was donated by Mughal Emperors, but this is not true. The land for the city of Amritsar belongs to the villages Tung, Sultanwind, Gilwali and Gumtala. These particular villages came under tehsil Patti and Distt. Chhabal during the Guru’s time.

Sri Guru Amardas Ji along with Sri Guru Ram Das Ji, Baba Budha Ji (a great devotee of Sikh Religion) visited and found a lonely and peaceful area in the centre of these villages. At that time this piece of land (The walled city of Amritsar) was bought from the villagers for 700 Rs. During the times of Maharaja Ranjit Singh and the British Empire, the city was free from the state taxes.

The foundation of Golden Temple was laid by a Muslim saint Hazrat Mian Mir Ji of Lahore on 1st of Magh, 1645 Bikrmi Samvat (December, 1588). The construction work was directly supervised by Sri Guru Arjan Dev Ji himself and he was assisted by the prominent Sikh personalities like Baba Budha Ji, Bhai Gurdas Ji, Bhai Sahlo Ji and many other devoted Sikhs.

Unlike erecting the structure on the higher level (a tradition in Hindu Temple architecture), Sri Guru Arjan dev Ji got it built on the lower level and unlike Hindu Temples having only one gate for the entrance and exit, Guru Sahib got it open from four sides. Thus he created a symbol of a new faith, Sikhism. Guru Sahib made it accessible to every person without any distinction of caste, creed, sex and religion.

Sri Harmandir Sahib is built on a 67ft. square platform in the centre of the Sarovar (tank). The temple itself is 40.5ft. square. It has a door each on the East, West, North and South. The Darshani Deori (an arch) stands at the shore end of the causeway. The door frame of the arch is about 10ft in height and 8ft 6inches in breadth. The door panes are decorated with artistic style. It opens on to the causeway or bridge that leads to the main building of Sri Harmandir Sahib. It is 202 feet in length and 21 feet in width. 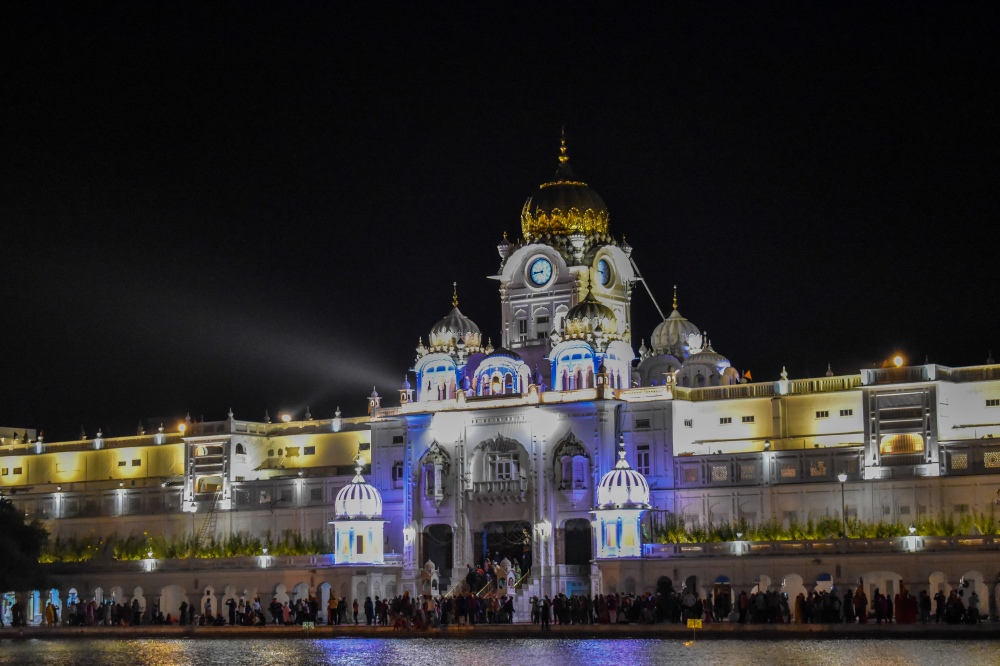 The bridge is connected with the 13 feet wide circumferential path. It runs around the main shrine and it leads to the ‘Har ki Pauri’ (steps of God). On the first floor of Har Ki Pauri, there is a continuous reading of Sri Guru Granth Sahib.

The main structure of Sri Harmandir Sahib, functionally as well as technically is a three-storied one. The front, which faces the bridge, is decorated with repeated cusped arches and the roof of the first floor is at the height of the 26 feet and 9 inches.

At the top of the first floor, 4 feet high parapet rises on all the sides which has also four ‘Mumtees’ on the four corners and exactly on the top of the central hall of the main sanctuary rises the third story. It is a small square room and has three gates. A regular recitation of Sri Guru Granth Sahib Ji is also held there.

On the top of this room stands the low fluted ‘Gumbaz’ (dome) having lotus petal motif in relief at the base inverted lotus at the top which supports the “Kalash” having a beautiful “Chhatri” at the end.

Its architecture represents a unique harmony between the Muslims and the Hindus way of construction work and this is considered the best architectural specimens of the world. It is often quoted that this architecture has created an independent Sikh school of architecture in the history of art in India.

Akal Takht Sahib, The highest temporal seat of Sikhism was founded by the Sri Guru Hargobind Sahib Ji in the year 1609, assisted by Baba Budha Ji and Bhai Gurdas Ji. Guru named it Akal Takhat (The throne of Almighty). Guru Hargobind Sahib used to hold his court, listened to the woes of needy. Guru wore two swords of Miri and Piri at this place, the worldly emperor robe with a plume on the turban, ordered the Sikhs to bring weapons, horses as an offering and be saint and soldier as well. The tradition of singing ballads of war heroes with stringed instrument (Sarangi and Dhadh) began at this place.

Akal Takhat Sahib has its own traditions i.e. the priest will recite the evening prayer (Rehras Sahib) and Ardas, with a naked sword in the hand. Some rare weapons pertaining to the Sikh Gurus and Sikh warriors are displayed during the day in Golden Palanquin and explained to the visitors every evening.

It is the most supreme of all the Takhats. There are four other takhats established by the Panth (community) during the last century:

The Jathedar of the Akal Takhat is the highest spokesperson of the Sikh Panth and is meant to be a spiritual leader without control or influence from any outside, politically motivated sources.

The Role of Akal Takhat Sahib

The original structure of Akal Takht  Sahib was built by Guru Hargobind ji, Bhai Gurdas ji and Baba Buddha ji, with their own hands. No other person or artist was employed to build the platform. Guru ji remarked that the seat of guru would serve the Panth for eternity. Guru ji raised the height of the platform to twelve feet, defying the royal edict of Jehangir that no other person except the Emperor himself can sit on a raised platform of more than three feet. Guru Hargobind would regularly sit on the raised platform, Takht, with all marks of royalty and dispense justice for all disputes of Sikhs.

The Akal Takhat was built a fraction lower than the Harimandir Sahib, implying the order of importance, that the search for spiritual grace was always to lead. A similar balancing of assertion and submission was built into Sri Guru Hargobind Ji’s daily routine, which alternatively highlighted the shrine, with its spiritual function and self-effacing architectural symbolism, and the throne platform, with its assertion of sovereignty and temporal authority. The Guru started the day with worship in the Harimandir Sahib; he would then go on a hunt in the late morning and grant audience from the Akal Takhat Sahib in the afternoon; in the evening he would return to the shrine for prayers and hymns, and at night he and his followers would return to the Akal Takht Sahib to listen to martial songs of heroic deeds.

It is from the Akal Takhat that Hukamnamas (edicts or writs) are announced to provide guidance or clarification on any point of Sikh doctrine or practice. It may lay under penance persons charged with violation of religious discipline or with activity prejudicial to Sikh interests. It may place on record its appreciation of outstanding services rendered or sacrifices made by individuals espousing the cause of Sikhism or of the Sikhs. Importantly, no individual is above the Akal Takhat Sahib.

Farsighted leader, valiant warrior Maharaja Jassa Singh Ramgarhia got the Ramgarhia Bunga constructed in the year 1755. Ramgarhia Bunga stood apart from the contemporary buildings due to its architecture, layout, construction marble work and the fresco designs. The Bunga got constructed by S. Jassa Singh Ramgarhia houses Diwan-e Khas accommodating royal seat and the roof of the hall is supported by 44 stones pillars representing a fine work of the Sikh school of architecture and stone masonry.

The royal seat is placed at a level much below the level of Harmandar Sahib, Which testifies the faith and respect, the ruler had in the Guru, his technical skills, his planning & acumen for construction etc. Prison is located underneath the royal seat and the treasury opposite to the same. Proper provision has been made to accommodate official, ministers and generals. A well is also located in the Bunga and arrangements for proper ventilation are also available. Two 156ft. high minarets have also been constructed to ensure due surveillance in and around Sri Darbar Sahib. 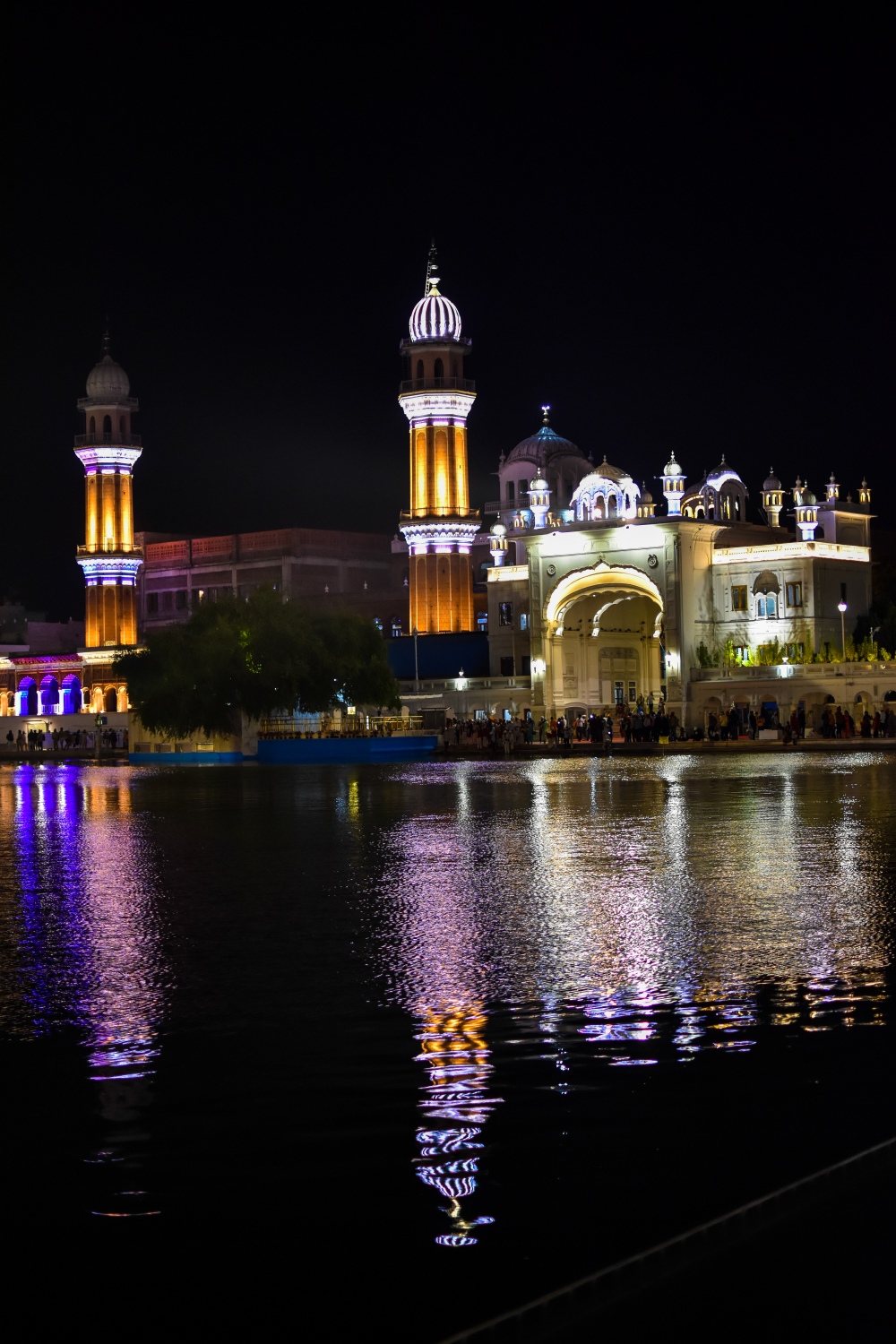 Art and Architecture of Golden Temple

Sri Harmandir Sahib is not only a place for mental solace, but it also provides the rarest of artwork to the visitors and art lovers visiting this shrine. The art displayed here is neither a copy of Islamic art or Hindu traditional art but a rare work of craftsmanship of fine art by Sikh Artists.

All the domes of Harmandir, inner walls, the door panels exhibit goldwork. Special designs have been given to the copper sheets and then they have been covered with gold leaves. This work is also on the inner roofs.

The beautiful designs depicting, birds, animals, flowers have been engraved in marble and then studded with colourful semi-precious stones, that come out to be a great artwork. In the artwork, one can find life everywhere in the shape of human beings, birds, animals and flowers. 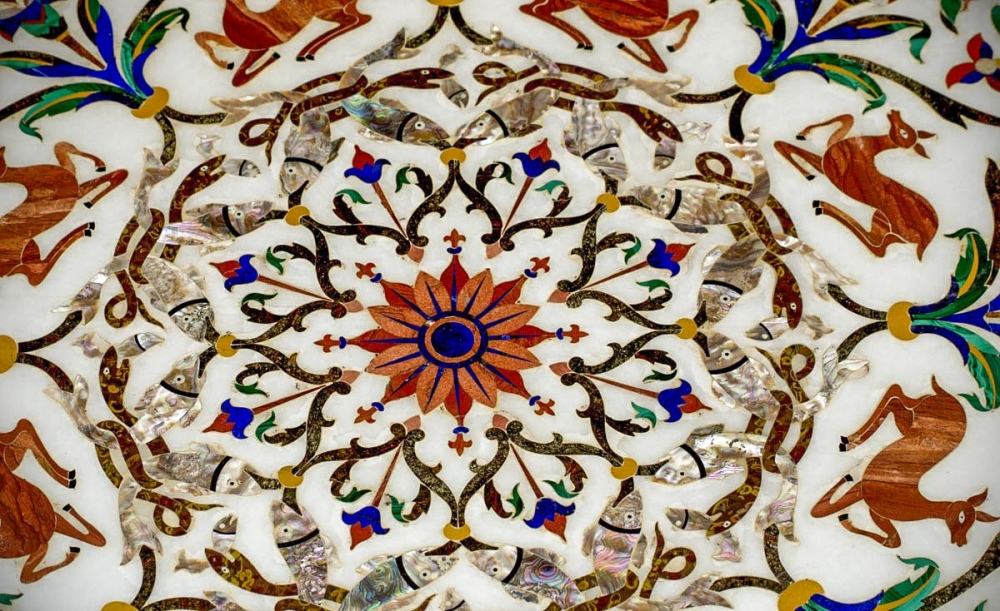 Some interesting facts about the Golden temple

Sri Harmandir Sahib (The Golden Temple) organises the largest langar sewa in the world. It serves around 100,000 devotees daily. While food is served, all the devotees sit together in rows on the floor, irrespective of their religion, caste or creed. All the devotees are considered equal here.

Stairs to the Temple

The stairs that enter the temple go downwards. This is designed in this way to symbolise the humble way of living.

Located on a level below the ground level

Structurally, the temple is located on a level below the ground level as it signifies that one must be humble and go down to reach the temple of God.

Maharaja Ranjit Singh was the one who covered it in gold in 1830, two centuries after its construction. This took 162 kg of gold, then worth about Rs 65 lakh. It’s all made of 24-karat gold, which is much purer than the 22-karat gold present in Indian households today. Back in the 90s, it was renovated with 500 kg of Gold. The value of this quantity of Gold would be more than Rs. 150 crores. 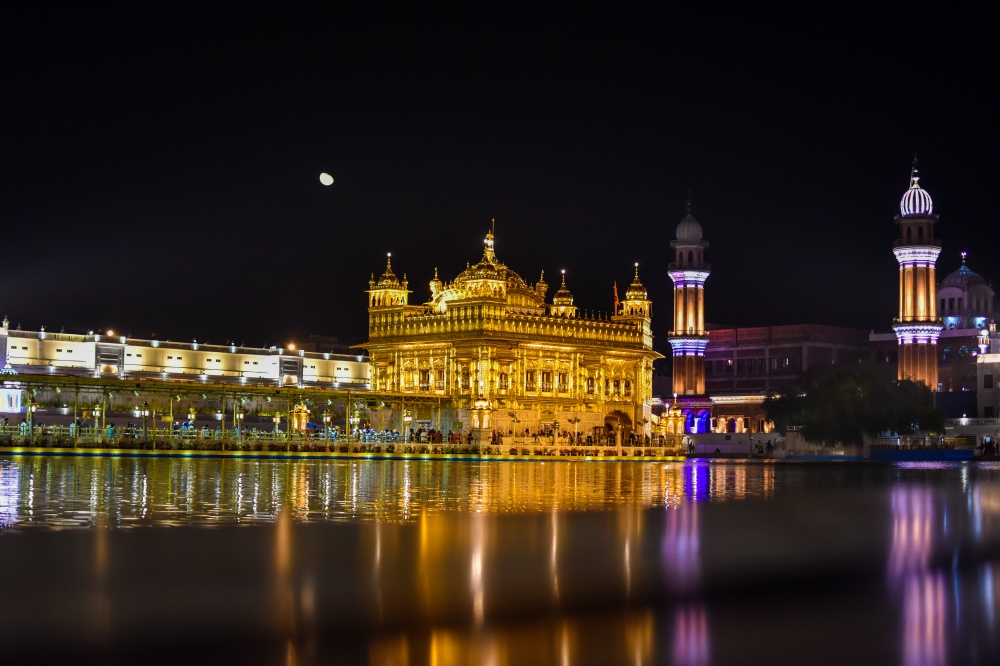