Sarahan, I got to know about this place from one of my colleagues. Actually I was planning to go for a solo two-day hike nearby Shimla, however, he suggested me to pay a visit to the divine Bhimakali temple in Sarahan, a small village known as the gateway to Kinnaur district in Himachal Pradesh. Sarahan is located at an altitude of around 7,589 feet above sea level and about 7 km above the River Satluj. It lies in the Rampur Town at a distance of about of about 504 kilometers from New Delhi and 163 kilometers from Shimla. 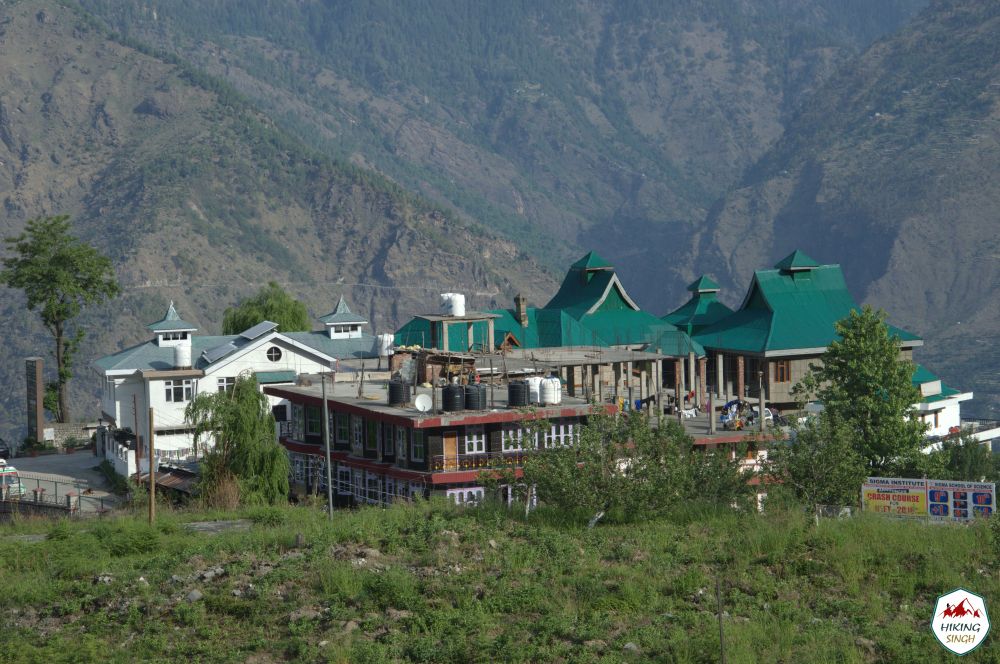 I decided at the eleventh hour to visit this place. Packed my bags and boarded an HRTC bus from Sector 43 Bus Stand, Chandigarh at about 12:36 AM to Rampur. I reached New Rampur Bus Stand by 11:00 AM in the morning. Then I left for Jeori as no direct bus to Sarahan was available at that time. The bus stopped at blok as the bridge was no safer for buses to pass through. A  new bridge was being constructed and I walked a bit to get on another side to get a cab to Sarahan. I reached Sarahan by 1:30 PM.

Sarahan is surrounded by viridescent mountains on all sides. The main attraction in Sarahan is the Bhimakali temple which is said to be over 800 years old and is located in the heart of the village. The Bhimakali temple exhibits statues of both Hindu and Buddhist deities.

When I saw the Bhimakali Temple, I was just left awestruck. I was completely captivated & mesmerized by this royal architectural masterpiece. The temple adorns the wealth of wooden carvings. I had never ever seen a temple of this stature. Bhimakali temple has a lovely courtyard to capture its unparallel beauty. The craftsmanship is literally incomparable. The temple architecture temple exhibits fine artwork of Himachali craftsmanship, influenced by Tibetan, Buddhist and Hindu styles of architecture. The Bhimakali shrine features pitched slate roof, golden towers, pagodas, and carved doors.

There are two adjacent temple buildings. One is old and resurrected, and the other is relatively new. Alternate rows of grooved and interlocked stones and wood provides strength to the walls. Thick walls with lower roofs found in typical mountainous region buildings provide warmth during winters.

Sarahan being a small village is best covered on foot, walking around the village post tea time is the best way to experience the village first hand since this is also the best time to get a chance to mingle with the village folks who are returning back from their day’s work in their fields, yes the beautiful apple fields. The fields that surround the small village with their slate-roofed houses, compose pictures of pastoral perfection. The people are extremely polite & friendly and love to tittle-tattle. 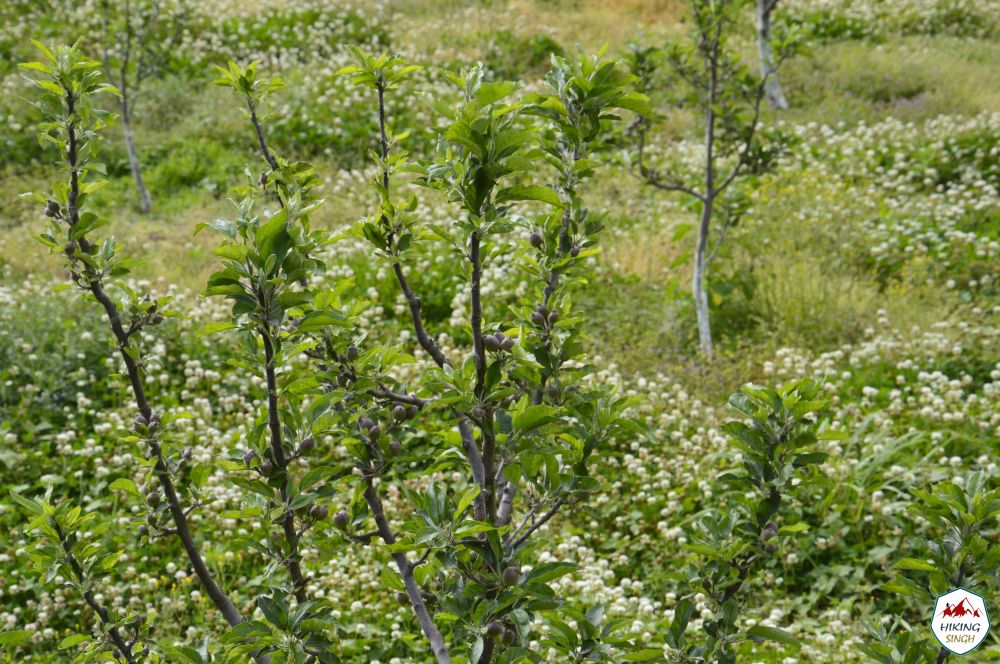 There is plenty of accommodation ranging from guest houses to hotels. The Bhima Khali temple also has its own rest house which sublets rooms at a very minimal price. Most of the guest houses also serve food which is normally thali which consists of dal, rice, vegetable, and chapatis.

I also got to know that Sarahan is an important stopover for traveler’s en-route to the Trans-Himalayan cold desert of the Spiti Valley and is the only village with decent accommodation and is the ideal place to break journey before the actual climb to Spiti Valley begins.

The temple is dedicated to Goddess Durga in the form of Bhimakali and is one of the famous Hindu shrines in the Himalayan province. Initially, the temple was the worship place of Bushair rulers of Rampur (Shimla). The 800 years old temple is believed to be among one of the 51 Shakti Peeths of Shaivite Hindus. According to Hindu mythology, the Shakti Peeths are devoted to Shakti, also known as Durga, the Mother goddess.

The small village of Saharan also provides a sight of the holy peak, Srikhand Mahadev. Located at an altitude of 5,227 meters, the trek to the peak is among the popular trekking routes. There are also other trekking options available at Sarahan. Trek to Bashal and rustic Ranwin village starts from Sarahan itself, but due to the shortage of time, I was unable to do one. You will fall in love with this place, such a calm & composed place with a serene environment. Sarahan or Sarahan Bushahr was also the summer capital of Bushahr kingdom, with Rampur Bushahr considered the winter capital.

Once a palace of the royalty of Bushahr, the wooden towers of the temple are now an iconic symbol of this idyllic hill town. It is believed that when Sati, daughter of King Daksha, married Lord Shiva, her father was extremely disapproving. In order to rub it in, he organized a great yagna, inviting everyone but his son-in-law. Sati could not take this insult to her husband and threw herself into the sacrificial pyre as a mark of her allegiance to her lord. When news of her death reached Shiva, he was livid. Carrying Sati’s body on his shoulder, he raged havoc all over the universe with his dance of fury. So destructive was his wrath that the gods appealed to Lord Vishnu for help. Vishnu responded by unleashing his chakra and severing Sati’s body into 51 pieces. Wherever a portion of her body fell, a Shakti Peetha was born. Her ear, it is believed, fell at Sarahan, and when a sage by the name of Bhimagiri set foot on this sacred spot, his staff sank deep into the ground, revealing the image of Bhimakali. The goddess declared to him that this was her preordained home where she would reside forever. 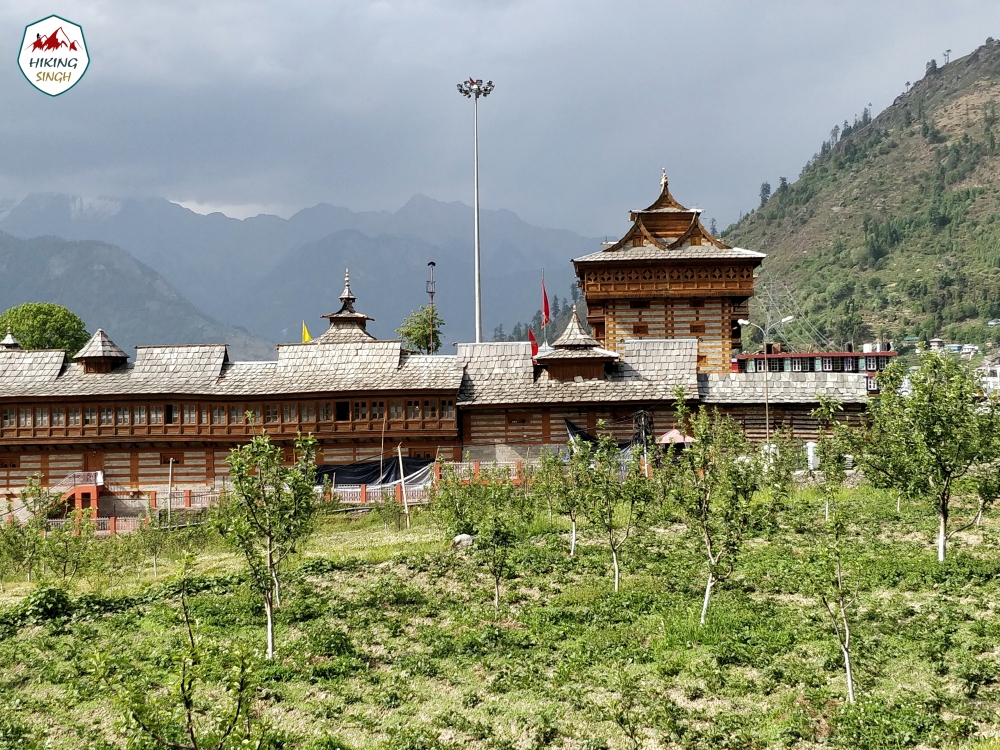 And what a home it is, with its ornate carvings, silver doors, golden minarets, and slanting wooden roofs. A combination of Hindu and Buddhist architecture, the temple that we see today is actually a replica of the old one which was damaged in an earthquake nearly a hundred years ago.

On one side of the wide courtyard lay the entrance to the towers. This first entrance opens into another courtyard where two bright yellow tiger statues guard the doorway to the main temple. Before you can carry on, you are stopped by another guard, this time, human. He gives you a key and shows you to a locker where you are to leave your belongings (camera, leather items). He then gives you a cloth-cap to cover your head with, unless of course, you have your own headgear.

On the top storey, behind a canopy of exquisite silver filigree, stood the icon of Bhimakali. Below that floor was the idol of Goddess Parvati, enshrined as the divine consort of Lord Shiva. If there was ever a place where you could feel a sense of peace and power at the same time, it was this.

After checking out the village called it a day.  I had my dinner and went for a short walk. I thought why not to try to get some pictures of stars. The woodwork, green cover is enthralling with bursts of pink and red & yellow roses growing wild all over the place. I climbed a bit to have a perspective view of the village. I was able to see the entire hill town spread out like a picture book in front of me. After having breakfast at the local dhaba I took a shared cab that drooped me at Gharat. From Gharat I took another cab to reach blok. From there I crossed the old bridge road and boarded the bus to Rampur. After Reaching Rampur I immediately got a bus to Chandigarh. The weather had started changing from sunny to rainy and at Narkanda the rain gods showered their blessings and it started raining cats & dogs. The view of the mountains became more & more beautiful. The apple orchards and the cloud formations just took my breath away. It was a complete surprise.

The bus made a halt at Shimla for half an hour and I relaxed a bit and then started my journey back to Chandigarh. I reached Chandigarh by 10:30 PM.

It was a totally unplanned and an amazing weekend I could have ever wished. If you want to visit Sarahan please spend three to four days to see other places nearby such as Ranwin, trekking to Bashal peak, visiting pheasant breeding center & Bhabha valley which is 50 km from Sarahan, a beautiful valley along Bhabha river. Link road to valley originates at Wangtu. It has a beautiful landscape, reservoir lake, alpine meadows and is best famous for trek route to Pin Valley in Spiti.

May – July. being a holy place it might be crowded during festival season.